This spring, twenty teens took a three-day trip to the Windy City, where they visited some of the city’s most well known sites. But these teens weren’t tourists. They traveled to Chicago for a series of teacher development experiences.

These youth—hailing from southern Illinois, the Peoria area, and Urbana-Champaign—are 4-H teen teachers for educational summer camps hosted by the Digital Innovation Leadership Program (DILP), where they instruct younger students in topics related to digital literacy and innovation. During the school year, the teens support ongoing programming around digital manufacturing and digital media in their local communities. 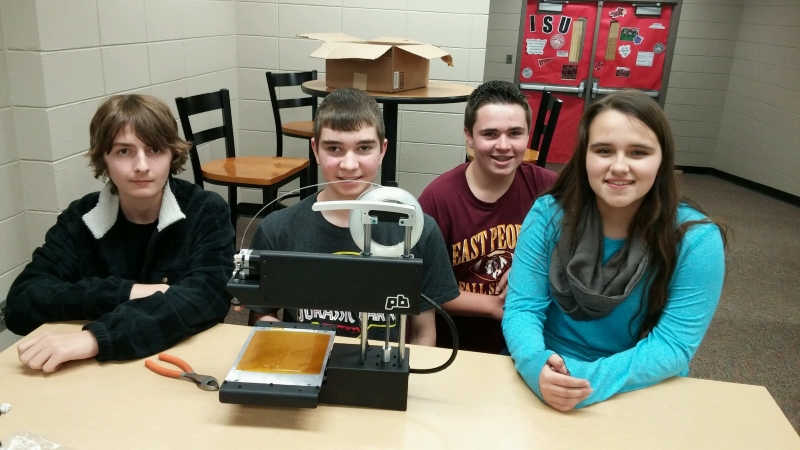 Maker SPIN Club motto: “If you build it, you will know how to fix it!” (PDF) – November 2015, Fulton—Mason—Peoria—Tazewell Unit Extension Snapshot

“‘I learned wiring is tough.’ ‘I learned building a 3D printer is kind of difficult. I had to take apart the Y axis several times, but I got really good at putting it back together.’ These comments were from two of the teens who are part of the Maker 4-H SPIN Club at East Peoria High School. They have spent the last eight weeks building three 3D printers—one that will remain at the high school, one that will be used at Fondulac Library and one that will be used at River City Labs.”

The Digital Innovation Leadership Program will be featured in the UI Extension Annual Meeting taking place this week at the iHotel November 18-19.  The meeting brings more than 200 UI Extension staff together from all around the state. GSLIS faculty and CDI Director Jon Gant, GSLIS faculty Martin Wolske, and Informatics/CU Fab Lab staff Jeff Ginger and Lisa Bievenue will be presenting on the DILP success around engagement with Extension youth and staff as a case study in the session “Broader Impacts 101: Building Connections Between University Researchers and U of I Extension Faculty”. DILP is also hosting an open house at the CU Community Fab Lab the evening of November 18; 30-50 Extension staff are expected to visit for demos and workshops on making.

“The Champaign-Urbana Community Fab Lab is an open and collaborative workshop space for computer-driven innovation, design and fabrication. Makers of all kinds visit the lab to imagine, design and create using open source software and DIY equipment, making the lab a place where entrepreneurial initiative, collaboration and lifelong learning are enabled and celebrated. Many resources, including skilled volunteers, computers, computer-controlled (CNC) machines, advanced materials and electronics assembly tools are available to the entire community. These high tech tools have made it possible for patrons to build virtually anything imaginable, from simple stickers to fully-functional robots. The uniqueness of lab site has encouraged local inventors to develop prototypes for their designs.”

Lisa Bievenue, Assistant Director of the Illinois Informatics Institute, will present at the Public Engagement Colloquium about the CU Community Fab Lab on Wednesday, October 21, 2015. The event will be held at Illini Union Room B from 12-1 pm. Click here to register for the event by Wednesday, October 14, 2015. Lunch will be provided to all registered participants.

The 2015 4G STEM Camp engaged youth and adult participants in a weeklong experience with site visits to Peoria-area businesses, offered a two-day in-service for teachers and librarians, and provided additional programming in Peoria Heights and at the Peoria Riverfront Museum focused on the development of digital literacy skills.  Programming was provided by partners from the Digital Innovation Leadership Program, the Center for Digital Inclusion, the Champaign-Urbana Community Fab Lab, University of Illinois Extension, Bradley University’s Center for STEM Education, and the Greater Peoria Economic Development Council.

On October 16, 2015, Congressman John Shimkus visited University of Illinois Extension-Unit 27, which serves Alexander, Johnson, Massac, Pulaski and Union Counties in Illinois. Congressman Shimkus met with staff and participants in the Teens as Teachers program, who demonstrated 3D printing and fabrication.

“The Illinois Science and Technology Coalition has released the 2015 Talent Index which sheds light on the STEM talent supply and demand in Illinois. STEM stands for science, technology, engineering, and math and is a focus in Illinois education and its workforce.”

Magee presents research at the the Youth, Literature, and Culture Research Group – October 9, 2015

On October 9, 2015, the Youth, Literature, and Culture Research Group will meet to hear Assistant Professor Rachel Magee talk about her research “Youth Are Smarter Than We Think: Teens, Technology Use, and Values.” The meeting will be held at 10:00 am in the Center for Children’s Books at the Graduate School of Library and Information Science. The event will also be streamed for virtual attendance via Blackboard at https://sas.elluminate.com/site/external/launch/dropin.jnlp?sid=407&password=GSLIS-Mtg1Participant.

“At the Makers in Motion summer camp in Peoria, IL, the CUCFabLab team tried out a new activity to complement the camper’s visit to the museum’s planetarium. At the end of the camp, we had a whole sky-full of glowing constellations. The creative soldering abilities of 7th and 8th graders surprised us — this was just a day after assembling their first ‘blinky badge’!”

“Research Associate Professor Jon Gant will lead a series of webinars this fall designed for local government officials across the state of Illinois. Webinars will focus on e-government topics, such as best practices (September 17), technology planning (October 15), and using data and analytics (November 19). The webinars are part of the Local Government Strategies for Digital Government series, which is sponsored by the Digital Innovation Leadership Program (DILP).”

“The Midwest Makerfest is a family friendly celebration of the art of making, tinkering, and inventing.”

“‘We are very excited about our partnership with U of I Extension and 4H. We will be at the State Fair to showcase new ideas for digital literacy programming in public libraries, schools, and community centers throughout the state. We will get a chance to talk with people from around the state Saturday and share very innovative ways to deepen computer skills in the Illinois workforce and enhance educational opportunities,’ said Jon Gant, principal investigator for the DILP program.”

“The Lab is for the community and university while also being funded by a combination of sources, including the Office of the Chancellor, Public Engagement, grants, unit support, gifts and donations. The space draws in a versatile and diverse group of people.”

“Illinois citizens will soon have increased access to the latest digital tools and economic development opportunities. The University of Illinois Extension has awarded $300,000 to the Center for Digital Inclusion at the Graduate School of Library and Information Science as part of a new campus extension and outreach initiative. The project was one of six collaborative projects led by interdisciplinary faculty and staff from across the Urbana campus selected to further Extension’s education and outreach mission.”

“Extension recently announced a new initiative that will broaden its engagement with scholars across campus and people throughout the state.”

A partnership with University of Illinois Extension, Graduate School of Library and Information Science, the Illinois Informatics Institute, Champaign-Urbana Community Fab Lab (including faculty from College of Engineering, College of Business, College of Media, College of Fine and Applied Arts, and School of Labor and Employment Relations)